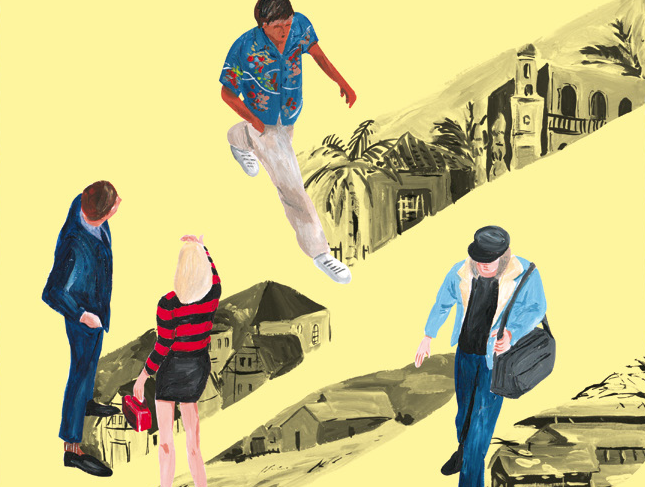 “More than ever people want or need to belong to, or be accepted in, places they were not assigned to by the accident of birth.” Atossa Abrahamian, The Cosmopolites.

Citizenship is still understood as a legal bond between a person and their nationality. It determines where we can travel, vote, work and live. But can we separate personal identity from national territory? Has the idea of “citizenship” changed in the 21st century? Emile sat down with three Sciences Po students whose stories might begin with borders, but whose allegiances reach far beyond where they were born.

One of the first questions you’re asked at Sciences Po is “Where are you from?” When we usually talk about citizenship, we assume it to be a loyal bond. How do you answer this question?

Léna: It depends on whether I have time to explain the whole story. Usually I say I’m French and Slovak. But I have Australian citizenship since my mother migrated to Australia. So when I say I’m Australian, people usually reply, “Ok, but you have a French accent.” It’s complicated and depends on the situation and the people I’m with. If I am with Eastern Europeans, I mention my Slovak half. Otherwise I just say I’m French. It’s easier because otherwise the spotlight is on you, and that makes me feel awkward. I’m from Réunion Island, which is already exotic enough for some French people.

Talya: I really hate the question because when I say I’m from Israel, it’s like the elephant in the room. I don’t agree with the government. I don’t like to identify myself as Israeli because carrying that passport is like carrying a privilege that some of the people that live in my country don’t have. I really hate it when people ask me where I’m from because my nationality is what represents me in some form. But diversity goes beyond your nationality. I grapple with the question and I would always say “I’m Israeli, but . . .” And it’s a really big but. I refused to serve in the military and I am against the occupation. I feel like I need to justify my identity all the time, for myself, and not just for the people that are curious about where I’m from.

Ramy: It’s just as complicated for me. I’m French Algerian, born in Algeria. I spent five years of my life in Algeria before the civil war got serious and we had to leave. My family ended up moving to Qatar, where I spent the next 18 years. One of the first questions my barber asked when I came to France was if I was of French or Algerian descent, which basically means “Were you born in France and have you spent your entire life in France, yet identify yourself as Algerian?” I started to realise that some young people were third generation French, yet still saw themselves as Algerian, Tunisian or Moroccan. It struck me that these people, whose families have been in France for such a long time, did not identify with the country. Personally, I’m very Qatari in some respects and very Algerian in others. After having spent four years in Vancouver for my undergraduate studies, I also feel Canadian, because who doesn’t like Canada?

How do you define your own identity? What other parts of your identity are important to you? Why do you think people always try to make sense of others by referring to a country?

Léna: Where you live has a big impact on who you are. When I was six, I moved to Russia and in my mind I was Russian-French. My Slovak grandmother was very upset about this. Then we moved to Djibouti, where I was lost since in my school there were a lot of children from military families. Their identity is based around belonging to the civilian or military population. So, I didn’t fit into the military group. The first question they ask, “What rank is your father?” My father is a teacher so this was the worst possible answer. Moving back to Réunion, I understood that I was born there, but that my identity had changed. My Slovak part was missing and I did not know how to include it. It remains a big question for me. But when I spent my third year abroad in Australia I started to identify as Australian. What I liked about Australia is that they have this concept of a “Slovak–Australian” or “French-Australian,” which we don’t have much in France. I found it very interesting to discover the concept of having a community inside a country. I started saying I’m French-Slovak-Australian, but my identity is still a continuing process.

Talya: I grew up in Tel Aviv, which is an open, liberal city but still within the boundaries of the Zionist discourse. After graduating high I worked with asylum seekers and refugees. I always tried to work with the non-Jewish population because I felt that I had the privilege that others didn’t. When I moved to New York for my undergraduate studies, I got two reactions when I said I was Israeli. People either don’t want to talk to you for political reasons, or you have the Jewish Americans who are very excited. I would always tell them, “I’m Israeli but you’re not going to be happy with what I have to say.” In France I find it even more difficult, so sometimes I lie and say I’m from New York. Sometimes you don’t feel like getting into a political conversation. My father is a Moroccan Jew. So people assume I speak Arabic and French, which is the moment when I run away from the conversation. There are many layers to my identity and I use them in different ways. I consider myself an Arab Jew, which is a controversial term to use in Israel. My father is Arab and he’s Jewish but he grew up in Casablanca. In France you are either being exoticised by Jews who like Israel or criticised without an opportunity to explain that I am more than my nationality.

Ramy: I run into a lot of controversy when I say I’m from Algeria because of the country’s historical relationship with France. People always ask me to talk about colonial Algeria and France today. I don’t always feel like talking about it. I didn’t grow up in colonial Algeria, I didn’t experience the independence, and part of me is French. It’s difficult to get people to trust you. They don’t always want to believe that you want to pledge allegiance to France. I think you can split them and equally love two countries. I always said I was Algerian instead of saying I’m from Canada when I was in Canada or I’m from Qatar if was in Qatar. The idea that you belong to a place just because you have the nationality or because you speak the language seems ridiculous.

Do you feel like being at Sciences Po has reinforced your ideas about citizenship? Belonging to one place or multiple places, being with so many international students?

Léna: I feel reassured that I’m not the only one. Throughout my childhood I was always the weird girl. Now I can see that other people at PSIA have similar stories. At Sciences Po, I joined Sciences Ô, the Outre-Mer association. I missed Réunionese food. Joining the association helped me meet other Réunionese students and deepen that part of me. The “outre-mer” is an interesting concept, because different parts of the world are thrown into the same group, but we don’t know each other. When we talk to each other, we discover so many different identities that take issue with the French identity.

Talya: At Sciences Po I get to meet people with nationalities and origins that I wouldn’t have had the chance to meet if I had stayed in Israel. My best friends here are from countries that are considered enemy countries to my country: Iran and Tunisia. I get to see another side of the broader Middle East and North Africa, which I felt very sheltered from because of the limitations of my nationality. I love the diversity here. I wish that there were a campus forum to express the diversity that exists beyond nationality. In general, I feel very privileged to be able to meet people.

Ramy: My previous university had a multicultural, multi-linguistic campus in Canada, so I feel like Sciences Po is an extension of it. But I do take issue with one thing at Sciences Po: I don’t know enough French people. The people who take the undergrad at Sciences Po and people who come here for their grad studies don’t mingle at all. Now I’m sitting next to an Israeli, this would not have been possible in Algeria or anywhere in the Arab world. I feel very privileged in this regard.

Talya: When first called to the army, I decided not to enlist. It was a very hard decision to make at the age of 17 because of the culture and the pressure that is put on you as an Israeli to be part of society and to serve in the military. Until today, it was the beginning of a process and I’m so happy that I took that decision. It brought me to places that I wouldn’t have been able to go to if I had joined the army.

Ramy: When I tell people I’m Algerian they automatically assume I’m only Arab. I’m also African, Berber, French, Mediterranean. It bothers me that people don’t want to accept that – they assume you just want to exoticise yourself, or just want to be different.

Léna: The best I felt was when I arrived in Sydney. The guy at the border looked at my Australian passport while I was speaking with the worst French accent ever. He smiled at me and didn’t even ask why or where I’m really from. When I’m in France, everyone points out my accent. In Australia, for the first time no one asked and I felt so relieved. They don’t force you to talk about your personal background if you don’t want to. They’re just open and curious.

By Alvina Hoffmann and Lindsey Prowse.

Launch of the European Chair on Sustainable Development and Climate Transition : Europe’s Role in the World to Advance Climate Neutrality